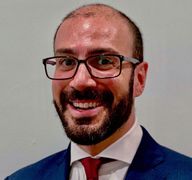 Gaddi Goren joined Turek Roth Grossman LLP in 2015, and was elevated to Partner in 2020. Gaddi has significant experience litigating, arbitrating, and mediating commercial/business/real estate/employment disputes throughout New York City and Long Island. Gaddi also has an active appellate practice, and has been involved with high stakes appeals before the First Department and Second Department. Also, most recently, Gaddi, along with his law partner, Jason A. Grossman, successfully obtained a unanimous reversal before the New York State Court of Appeals.

Prior to joining Turek Roth Grossman LLP, Gaddi was an Associate at Rivkin Radler LLP, and a Law Clerk to the Hon. Francis B. Schultz of the Superior Court of New Jersey, Hudson County.

New York Super Lawyer’s magazine has named Gaddi as a Rising Star from 2018 – 2021. Notably, only 2.5% of the lawyers in New York State are named to the Rising Stars list.

Gaddi lives on Long Island with his wife, daughter, and puppy (Sunshine). Gaddi is fluent in Spanish as his parents are natives of Santiago, Chile. Gaddi is an avid traveler, and loves visiting his family in California and Texas.